Cleveland History:
Cleveland has had a long industrial history and the skies were not always as clear as they are today. In fact, prior to air regulations and the introduction of local ordinances in the late 1880s, the skies were always clouded with industrial smoke. It wasn’t until federal regulations were put in place in the 1970s that air quality significantly improved.

Cleveland was one of the first cities in the United States to create a smoke department. The sole purpose of this department was to reduce the amount of smoke emissions from burning coal. Clevelanders were interested in creating a way to reduce these emissions due to the damage to buildings, furnishings, and the environment around them. With this damage came financial loss due to property damage and real estate values were lowered. When the department was first established, inspectors acted on complaints only and legal notices were served to the offenders with a timeframe for abatement. Unfortunately, these legal notices usually resulted in no action because once the case was brought into police court, the judge declared the ordinance defective or the evidence inconclusive. Other cases dragged on for years and were then thrown out by some of the upper courts. Any reduction in smoke during this time was likely attributed to the growth of public sentiment or the voluntary introduction of improved furnaces as a matter of business economy or civic pride, not legal measures.

The Smoke Ordinance went into effect April 1882 and was amended in July 1883. This ordinance was created for smoke abatement within the City of Cleveland. Progress on this ordinance was very slow as there were multiple efforts to repeal this ordinance. However, by adopting this city ordinance, it was believed that a reduction in smoke would also relieve a nuisance for the city and would increase the city’s real estate value.

An educational campaign was created and was thought to be more effective than serving legal notices that went nowhere. In order for the educational campaign to be launched, a new department would need to be created specifically for that purpose. Early in the programming, a group of inspectors would go around to different facilities and instruct on proper fire-stoking techniques. Even something this simple had a definite impact of air pollution.

Approved on June 4, 1903, this ordinance was created to prevent the emission of dense, black or gray smoke from smoke-stacks, chimneys, locomotive engines, and all other smoke-emitting stacks.

In 1908, an ordinance was approved that specifically targeted the smoke from furnaces. There were approximately 1,800 boilers in the City of Cleveland at this time. Today, we only have two coal-fire oilers. In 1908, the supervising engineer stated that approximately 50% of the smoke in Cleveland was abated between 1883 and 1908.

The Bureau of Industrial Hygiene was added to the Health Department in 1945. During this year, the bureau was managed by one individual.

The Air Pollution Control Division was formed in 1947, taking the place of the Department of Smoke Inspection. The division merged the smoke abatement activities of the Division of Housing with the Bureau of Industrial Nuisances and the Bureau of Industrial Hygiene. The Air Pollution Control Division was responsible for measuring pollutants in the air and for enforcing federal, state, and local pollution regulations, similar to the responsibilities of the Division of Air Quality today.

This amendment resulted in a major shift in our federal government’s role in air pollution control. The 1970 amendment allowed for comprehensive federal and state regulations to limit the amount of emissions from both stationary and mobile sources. Four major regulatory programs affecting stationary sources were initiated: The National Ambient Air Quality Standards (NAAQS), State Implementation Plans (SIPs), New Source Performance Standards (NSPS), and National Emission Standards for Hazardous Air Pollutants (NESHAPs). In addition to this, the Environmental Protection Agency (EPA) was established on December 2, 1970 in order to implement the requirements of the Clean Air Act.

Similar to the 1970 amendments, the 1990 amendments to the Clean Air Act had major milestones to how we control air pollution. In 1990, new regulatory programs were authorized to control acid rain and for the issuance of stationary source operating permits. A program to control 189 toxic pollutants, including those previously regulated by the National Emission Standards for Hazardous Air Pollutants was established. This amendment also expanded and modified provisions concerning the attainment of National Ambient Air Quality Standards. Lastly, the 1990 amendment established a program to phase out the use of chemicals that deplete the ozone layer. 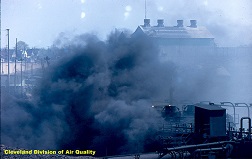 Visual Timeline:
The Cleveland Division of Air Quality (CDAQ) Visual Timeline is a free standing display with four panels that are each 2’ wide x 7’ tall. The display has photos that document the changing air quality in Cleveland beginning in the 1880’s through 2018. The display also includes contact information for CDAQ and the phone number for CDAQ’s air quality complaint hotline.

Are you interested in displaying the visual timeline at your organization? Contact Christina Yoka for scheduling at 216-664-2129 or cyoka@city.cleveland.oh.us. 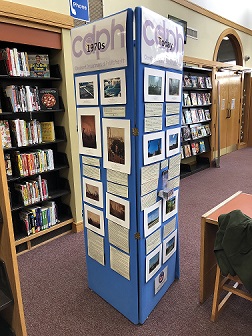 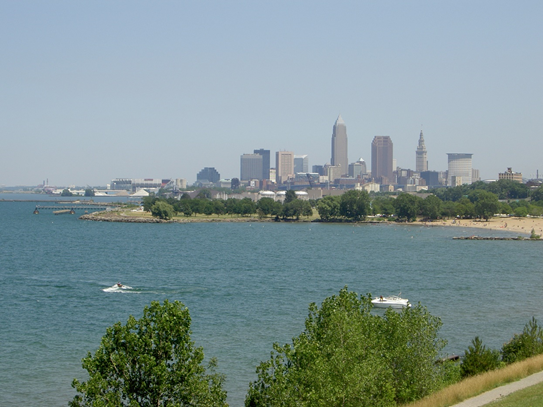